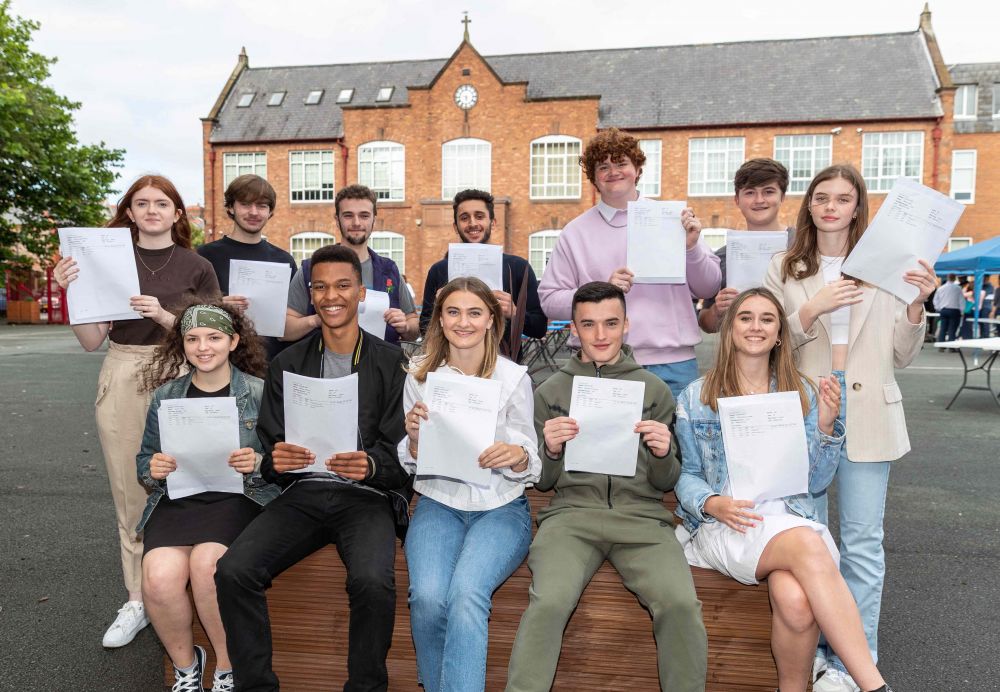 Congratulations to our amazing pupils who achieved an excellent set A Level results this summer despite the widespread disruption caused by the coronavirus pandemic.

Building on the high standards set in previous years the ‘Class of 2021’ recorded a 100 per cent pass rate in the key examinations, with more than a third of students (34 per cent) achieving three or more A* or A grades.

Almost two-thirds of all candidates (63 per cent) achieved three or more A*, A or B grade passes.

Top of the class at St. Mary’s this year is 18-year-old Majd Kweder from Bootle who only arrived in the UK from Syria three years ago.

Majd joined the St. Mary’s College Sixth Form on an Edmund Rice Scholarship (Assisted Place) and has achieved an incredible four A* passes in Biology, Chemistry, Maths and Further Maths. Majd is planning to study Economics in London.

Majd commented: “Having escaped war in Syria, I never thought I would be in this position in my life. The last two years at St. Mary’s have been the best two years of my life.

“I want to thank my teachers for all their help and support. It’s been hard work but I’m really proud of my results. It just shows that if you work hard you can achieve anything.”

St. Mary’s Principal, Mike Kennedy, commented: “Majd is an exceptionally bright and motivated young man and despite the challenges he has faced in his life he has thrived at St. Mary’s and we are incredibly proud of his achievements.”

Majd is one of five St. Mary’s students to have recorded straight A* grades this summer, the other high achievers being Head Girl Hope Brown, Daisy Davies, Lauren James and Laura Kearns, who all achieved three passes at the highest level.

Mike Kennedy added: “I am delighted to be able to announce such a pleasing set of results after what has been an exceptionally difficult time in the Sixth Form for our A Level students.

“With public examinations replaced by teacher assessments and the challenge of several extended periods of ‘lockdown learning’, they have all had to adapt to ways of working far different to those they would have expected.

“After rigorous assessment, they deserve credit for the success they have achieved and all the hard work and commitment that has gone into it.

“We are also very pleased that the vast majority of our students have been offered places at their first choice university, despite the increased competition for places this year.”

Mr Kennedy also paid tribute to the Upper Sixth Formers for their contribution to life at St. Mary’s over recent years: “They’re a wonderful group of young people and we’re very sorry to see them go, but we wish them all every success in the wide range of future paths they have chosen.”

Majd was interviewed by Lisa Marrey on BBC Radio Merseyside on 13 Aug 2021.

Exams
We use cookies on our website to give you the most relevant experience by remembering your preferences and repeat visits. By clicking “Accept”, you consent to the use of ALL the cookies. However you may visit Cookie Settings to provide a controlled consent. For more detailed information about the cookies we use, see our Cookies Page
Cookie settingsACCEPT
Manage consent