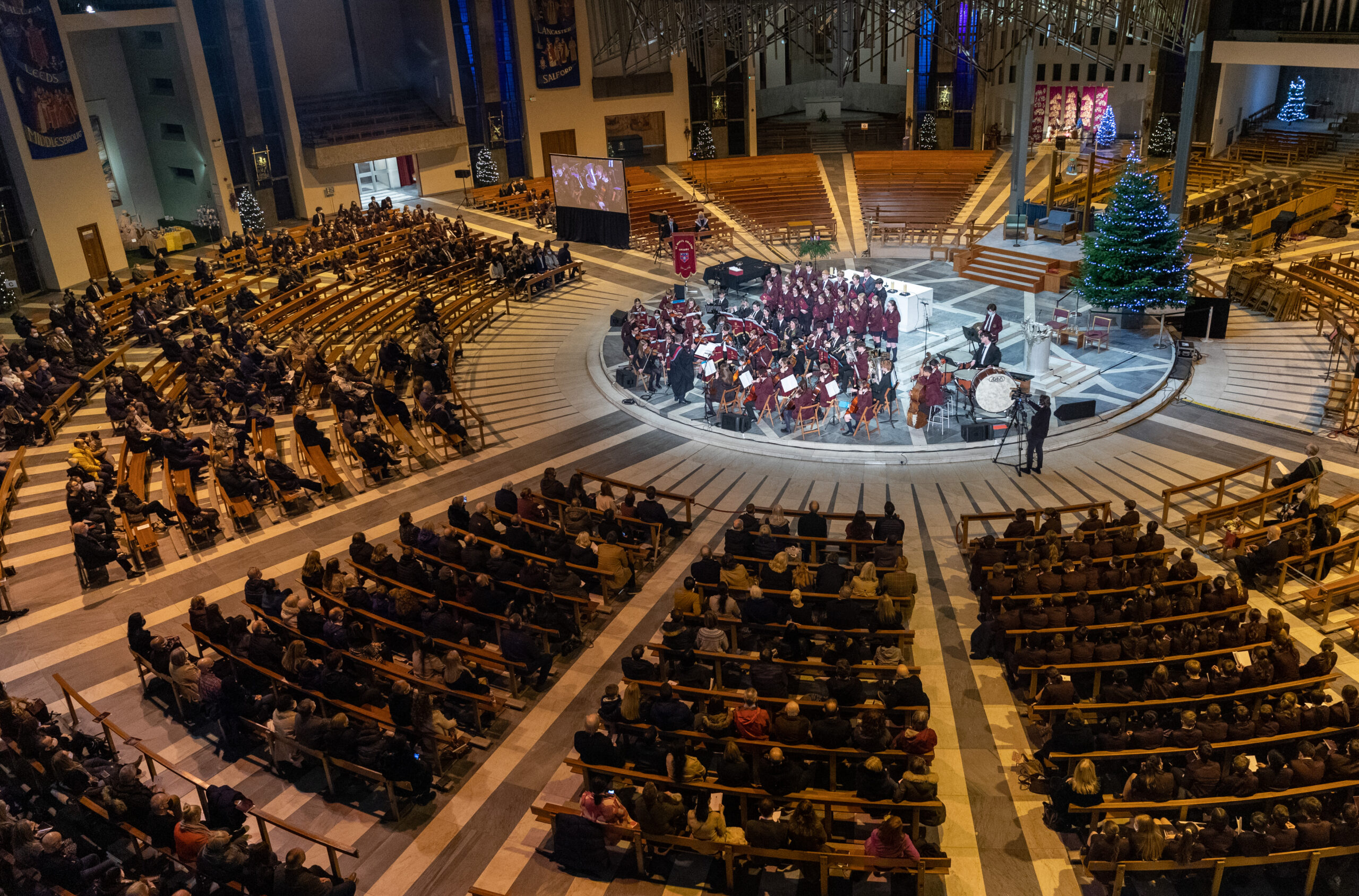 St. Mary’s looked back at the many achievements of its pupils over the last 12 months at its annual prize-giving ceremony recently.

After last year’s coronavirus-affected online event Liverpool Metropolitan Cathedral was once again the spectacular setting for the ceremony, which saw the school welcoming local multi-award-winning author and screenwriter Frank Cottrell-Boyce as the VIP guest speaker.

In an entertaining and well-received speech, Frank told pupils that wisdom comes from failure – it’s when things go wrong that the light shines in and you have a chance to grow in wisdom and resilience.

By way of an example, he spoke about the negative ‘Britain is going to look foolish’ press comments there had been prior to the 2012 Olympic Games opening ceremony, which he devised with Danny Boyle.

Despite this criticism, the two of them had persevered and in the end, the ceremony was hailed as a great success.

Elsewhere in his speech Frank acknowledged how difficult the pandemic has been for young people, and referred to them as heroes for the positivity and resilience they have shown.

He also praised St. Mary’s Christian values of inclusivity and thinking of others, which clearly resonated with him.

Meanwhile, in his speech Principal Mike Kennedy rounded up the highlights of the last year at St. Mary’s, telling guests that the school had again maintained its tradition of both academic excellence and encouraging achievement in sport, music and many other extracurricular activities.

Mr Kennedy reported that St. Mary’s had enjoyed another successful summer in terms of A Level and GCSE results, despite the challenges of remote learning caused by Covid-19.

One particularly noteworthy achievement had come from student Majd Kweder, an asylum seeker from Syria who arrived in this country with virtually nothing, joined St. Mary’s Sixth Form and achieved a remarkable four A* grades at A Level.

Mr Kennedy stressed however that at St. Mary’s it is the breadth of subjects that pupils study, and the range of other activities on offer to them, that makes the school so special.

For example, on the sports field, football teams from two age groups at St. Mary’s (under 12 and under 15) had made it through to the finals of the English Schools Cup, with the under 12s being crowned national champions.

And not to be outdone in netball St. Mary’s girls were Sefton Tournament winners at under 18 level and finalists at under 16 level, despite the fact that they had often faced teams from much larger schools.

In spite of these successes, Mr Kennedy accepted that some aspects of school life had inevitably been curtailed by coronavirus during the year, including its famous drama productions and some school trips at home and abroad.

Nevertheless, other activities had continued in a different form such as the Combined Cadet Force and the college’s impressive array of clubs and societies, from chess to debating and cookery to Mandarin lessons.

Mr Kennedy congratulated pupils for overcoming pandemic-related problems and remaining committed to these activities, highlighting their ‘enthusiasm, fascination and love of enquiry’ and their ‘admirable keenness to learn’.

There was also praise from the Principal for staff, governors and parents for their contributions to life at the college during the year, and the many successes highlighted during the ceremony.

Mr Kennedy concluded: “In many ways the last 12 months have been one of the most unusual and difficult periods in St. Mary’s history, but thanks to the effort and commitment of everyone at the school we have overcome the many pandemic-related issues we have faced.

“To all our prize winners at this event I want to say congratulations – you have achieved well and with credit.

“But I also want to congratulate everyone who is part of the St. Mary’s community – it’s your values and your character that are the real achievements being celebrated here today.”

Events
We use cookies on our website to give you the most relevant experience by remembering your preferences and repeat visits. By clicking “Accept”, you consent to the use of ALL the cookies. However you may visit Cookie Settings to provide a controlled consent. For more detailed information about the cookies we use, see our Cookies Page
Cookie settingsACCEPT
Manage consent